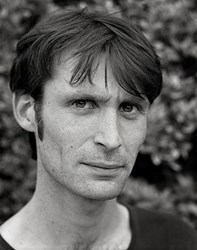 Floris Hovers was born in 1976 in Raamsdonksveer, in the South of the Netherlands.

After some basic training in engineering and advertising and presentation techniques in Utrecht, he studied at the Design Academy Eindhoven, and graduated in 2004. In 2006 he started his own design studio and workshop in Raamsdonksveer. A basic and simple approach to techniques and materials is essential for Hovers to communicate his vision and working method. Captivated both by the idyllic workshop and by the factory where pieces are mass-produced, he is driven to waver between these two. These extremes are a constant throughout his work, which he describes as industrial crafts. Hovers predominantly produces his own work; he cherishes the entire process from idea to finished product. He believes that the designer can also be a craftsman who realizes his own designs. Besides developing his own designs, Hovers also works for brands and manufacturers such as Magis.